Every morning I sit on the bus with my nose stuck in my latest read, one ear listening for the robotic woman to announce Sandown Ave. As she calls my stop, I close the book and look out the window waiting to catch a glimpse of the shop from across the street. Already it has become a familiar routine. 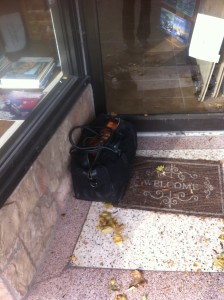 store front. The feeling that arose from the sight was akin to walking into the living room as a kid on Christmas morning and seeing the pile of presents tucked under the tree that hadn’t been there the previous night. Eyes locked on the store I hurried across the street, okay so my eyes were more concerned with watching for turning cars, but once I was safely across the street out of the way of moving traffic then my eyes locked on the parcel sitting by my front door. Someone had left me a donation of books 🙂

From the corner I could tell it was a bag and at first it looked like a nice bag which made me wonder who would leave a nice bag at my door. Perhaps they put the books in a nice bag because the books themselves weren’t particularly nice. Or maybe they had an overabundance of nice bags and this one was actually one of the least nice. As usual I was wrong, on both counts. On closer inspection I discovered that the bag wasn’t really all that nice and it had a broken handle and zipper. From the gap between the broken zipper halves I could see the top books peeking out at me saying “Let us out! We want to play!” 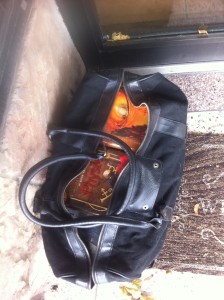 I hurried into the shop and remarked to myself how nice it is when people leave presents at the door. I unloaded the not quite nice bag and discovered the books inside where in fact pretty great. And now they sit on the shelves, swapping stories with the other books as they await a new home.