I am a firm believer in Christmas not being in people’s faces until December has begun. Don’t get me wrong I get excited about the holiday season pretty much as soon as it starts getting cold, but the decorations and the music don’t make an appearance until there’s less than a month to go. 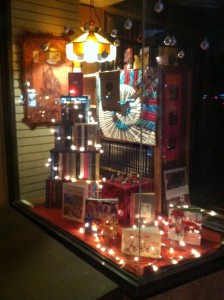 This isn’t a very good picture, maybe I’ll take another one…or you could come to the shop and see it for yourself. Yeah, that sounds like a better idea.

Yesterday in the shop the music began to play and decorations began to creep into the window. The process was slow. I was doing only a little bit of decorating at a time but by the end of the day the window was all happy and festive. The process left me craving mulled wine and gingerbread.

Anyway, this morning in the first five minutes of being open I had two customers in the shop (which is unusual at this time of year). The decorations were being decorative, the music was Christmassy, the customers were browsing and I was tidying up in the back. Then Walking in a Winter Wonderland came on. I happen to be rather fond of that song and have a hard time not singing along to it. So I started singing, kind of quietly and to myself but singing none the less. From the mystery section I hear one of the customers humming along with the song too. And then from history the other customer starts singing! I’m not sure if they noticed all of us were singing and I didn’t say anything because I didn’t want to ruin the moment, but it was awesome!

So to my festive singing customers I just want to say I love you and thanks for sharing in the holiday spirit with me.